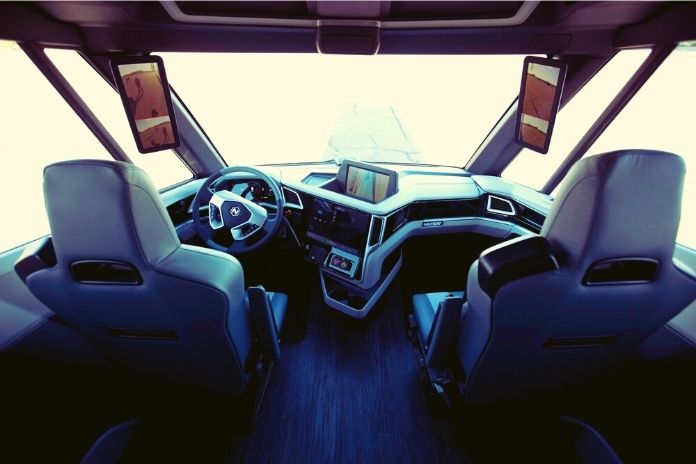 Autonomous Trucks Rolling: In future, vehicles will think & steer independently: How far is the technical development in commercial vehicles, what technical and legal hurdles still exist, and what role does artificial intelligence play? The international VDI conference Autonomous Trucks on March 27 and 28, 2019, in Munich will provide a comprehensive look at the state of the art. Two experts from the event dare to take a glimpse into the future in advance. They also explain what still needs to be done in terms of connectivity and security.

Autonomous trucks will reduce the burden of long-distance commercial vehicles. Delivery units can automatically bring parcels directly to the customer’s front door – this is what typical future scenarios look like. The artificial intelligence (AI) factor in interaction with increasingly powerful processors and computing units in the vehicle will play a significant role in this development. “Since not all possible everyday situations can be trained, the system in the vehicle must be able to react to changing conditions in a self-learning manner,”. Analysis of the development status of artificial intelligence for commercial vehicles reads: “There is still a need for concrete action here to design the systems in a comprehensive manner. Connectivity, on the other hand, is already being implemented effectively by various OEMs. However, there is still further potential for expansion here, for example, when exchanging information via Car2Car connectivity. This means that the flow of traffic can be better controlled to react quickly to dangerous situations.

Nowak expects typical application situations for autonomous trucks initially in cordoned-off areas, as is already practiced today in the first use cases. “Other areas are situations with controllable or few human interactions. In this context, the autonomous transport of goods on designated motorway lanes is also conceivable. Due to the existing infrastructure and special regulatory requirements, I see the fastest deployment here in the USA,”. Naturally, a decisive factor is the reliability and data security of the solutions. Technically, a system must be in place that is immune to cyber-attacks and provides end customers with long-term support in their tasks. “Reliable prerequisites for the operation of an autonomous commercial vehicle through clear regulations are also necessary. In addition, there are also non-technical issues such as corresponding insurance benefits that take account of the new operating conditions,”.

Heavy trucks and long-distance transport, in particular, are currently still a significant technical challenge for autonomous driving. We work together with the FAW Group, one of the largest truck manufacturers in China, and the independent driving start Pulai and Full Truck Alliance (FTA), a logistics company NVIDIA set about developing a driverless fleet of commercial trucks. The introduction is planned for the year 2021. This move is designed to accelerate the modernization of the long-haul transportation industry in China, which is focused on the large-scale commercial use of AI-controlled, fully autonomous truck fleets. In any case, Arslan is convinced that all vehicle categories will become self-sufficient in the medium term: “This includes everything from cars to shuttles to buses.

No Relief For Overcrowded City Centers Expected In The Short Term

However, comprehensive autonomous driving in all vehicle categories is likely to be a vision for the day after tomorrow. Autonomous driving will come in small steps. According to Nowak, the high traffic loads caused by express and courier trips in metropolitan areas are likely to persist, at least for the foreseeable future: “The widespread use of autonomous trucks in urban logistics will take a long time. I see this as one of the last use cases for this technology. “The situation is different in distribution and logistics centers, for example:” By using electric distribution vehicles and in conjunction with certified bodies and trailers, there is the possibility of increased deliveries Businesses and logistics hubs at night.

ALSO READ: Cloud Providers: Why They Are More In Demand Than Ever