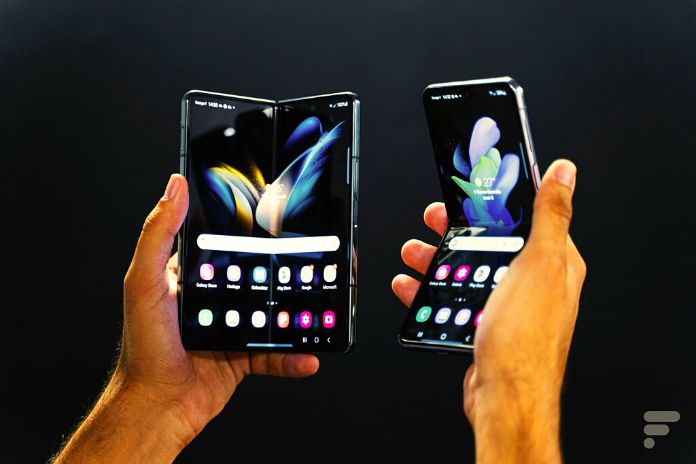 This is the new Compared to its predecessors, the Samsung Galaxy Z Fold4 is again available in three colours this year. The manufacturer used “grey-green” as the “marketing colour”. In addition to the primary colour, there is also a classic black and a beige tone. There is also a red colour variant in the Samsung store.

Inside the foldable device is a large 7.6-inch display with 2176 × 1812 resolution (QXGA+), AMOLED, and 120 Hertz (LPTO 1 – 120 Hz) support. The interior presentation is now three millimetres wider and more diminutive. This also applies to the front display, which is 2.7 millimetres wider.

Also new is the Snapdragon 8+ Gen 1 SoC processor, which, thanks to TSMC production, is significantly more energy-efficient than the 8 Gen 1 from the Galaxy S22 Ultra. The foldable is always available with 12 gigabytes of RAM and optional 256 GB or 512 GB of internal memory. There is also a storage configuration with one terabyte in the Samsung shop.

Something has changed with the cameras. Samsung recently relied on a 50-megapixel primary camera, which is said to achieve significantly more sharpness. The zoom lens “only” has a resolution of ten megapixels and should therefore enable 30x digital and 3x optical zoom. The ultra-wide-angle camera remains at twelve megapixels.

The Samsung Galaxy Z Fold4 uses two cameras in the displays. One of them is again under the collection. A ten-megapixel lens is still used on the front display.

Inside, Samsung again relies on a two-megapixel “UDC camera”. UDC stands for “Under Display Camera”. But this should now take better pictures because the pixels are smaller and arranged in a new grid.

The foldable is still the only foldable smartphone with an IP certification (IPX8). According to Samsung, it should withstand 200,000 folding processes. According to the manufacturer, it is also well protected with Gorilla Glass Victus+ on both sides. The battery remains the same at 4,400 mAh but charges comparatively slowly at 25 watts.

The tablet smartphone also supports wireless and “reverse charging” – but only with 15 watts. It runs on Android 12L/OneUI 4.1.1, which allows for a new taskbar when unfolded. This will enable apps to be placed next to each other without going back to the app drawer.

Samsung advertises primarily with a Microsoft and Google cooperation, which have now adapted their apps to the new form factor. There is still S-Pen support, but this is not built into the device like in the S22 Ultra.

The Samsung Galaxy Z Fold4 can be pre-ordered now. The basic version costs 1,799 euros. If you want 512 gigabytes of memory, you pay 1,919 euros. The variant with one terabyte is available for 2159 euros.

Samsung Galaxy Z Flip4: This Is What The New Version Of The Bestseller Can Do

The Samsung Galaxy Z Flip4 is a little more compact than its predecessor, the Z Flip3. The hinge has been shortened by 1.2 millimetres. The same goes for the display edges.

Samsung’s Z Flip4 comes in four colours, with this year’s primary colour being a “Bora Purple.” Otherwise, the device is also available in the colours graphite, pink, gold and blue. If you want to customize the Samsung Galaxy Z Flip4, you can build your own “Bespoke Edition”. This includes up to 75 other combinations.

The Flip4 also uses the Snapdragon 8+ Gen 1 with eight gigabytes of RAM. The internal memory starts at 128 GB. But there is also a version with 256 gigabytes and 512 gigabytes. The device also has three camera sensors.

In addition to the unchanged ten-megapixel front camera, this includes two 12-megapixel lenses on the back. The ultra-wide angle is identical to the Flip3. With 1.8 μm, the wide-angle lets in significantly more light than before (1.4 μm).

On the front display, you can now reply to notifications, call up quick settings and control the smart devices in the house via widgets. Since Samsung also markets the Galaxy Z Flip4 for vloggers and bloggers, the manufacturer promises better compatibility with Instagram, YouTube and Co.

At 187 grams, the Samsung Galaxy Z Flip4 is very light. However, the battery has been increased from 3400 to 3700 mAh. With 25 watts, the device still charges very slowly. Like its predecessor, the new device is still IPX8 protected against water. With Gorilla Glass Victus+, it should also be well protected against falls.

ALSO READ: Disney Plus Is Increasing Its Prices And Introducing Advertising