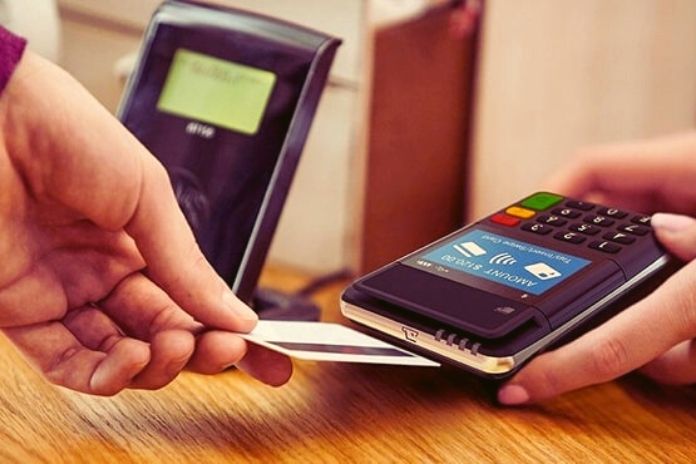 Google, Sparkasse, and the Volksbanken And Raiffeisenbanken have been offering their customers contactless payment technology for some time. Other financial institutions are continuously following suit. Who can use mobile payment, and which areas of application can the technology still cover?

NFC – The Technology Behind “Mobile Payment”

The difference between the Girocard and contactless payment using NFC technology is that it is easier to use. While the bank card first had to be inserted into the POS device and then the PIN had to be typed in, with an NFC device, only a short distance from the POS terminal is sufficient to make the payment automatically without entering a PIN. In reality, however, this has so far only been possible with smaller amounts of money, as misuse is conceivable.

The customer only needs to hold their NFC-enabled credit card or smartphone up to the terminal to make a transaction. This creates an electromagnetic field that is necessary for radio transmission. The POS terminal gives a quick signal so that the cashier and customer can see the payment. Many students or employees of large corporations are already familiar with this process: The technology is used in canteens for uncomplicated payment, thus preventing long queues.

The transactions are based on NFC wireless technology, which works in both directions – i.e., both send and receive data. The near-radio technology NFC is an international standard for the contactless exchange of data and is not only interesting for mobile payment. Therefore, NFC offers a decisive advantage in the payment area: because a transaction only takes place when the device and terminal are a few centimeters apart, an external hacker attack turns out to be complicated and unlikely. In addition, digital money transactions do not involve large amounts of data.

The NFC data transfer rate is a maximum of 424 kBit / s (with a distance of less than 4 cm) so that only small amounts of data are transferred in a short time. The technology was developed above all to transmit simple information quickly, securely, and easily. This should make the technology ideally suited for monetary transactions. It is also possible to transfer large files: NFC initiates the coupling with nearby radio networks such as Bluetooth or WLAN – the transfer only occurs indirectly via NFC.

Who Can Use NFC, And Are There Any Hidden Costs?

An NFC-enabled device such as a smartphone or the giro card is sufficient to make contactless payments at the checkout. Some banks already offer corresponding girocards. The prerequisite, however, is that the counterpart, the POS terminal, is also equipped with NFC technology. Currently, around 600,000 of more than 800,000 POS terminals are already capable of doing this. Four hundred seventy-five thousand of them also have the update to carry out the payment by Girocard. The expansion of this technology is comparatively inexpensive and will therefore presumably continue to advance. So the infrastructure is there.

But there are still only a few users of this payment option. A survey by the Bundesbank revealed the lack of need as the most common answer. The second most common answer was, therefore, security concerns. It is also due to the still widespread cash payment that digital payment methods cannot establish in this country. After all, 74 percent still pay with notes and coins at the till.

Payment via NFC does not cost the end-user anything – just like transactions with a giro or credit card. Only Apple with the payment service Apple Pay demands a sales fee of 0.15% from the merchants.

In addition to the active NFC devices, there are also so-called NFC tags in inexpensive stickers. Such tags can be used in many areas today, for example, on posters that still use QR codes today or in smart homes, where NFC tags carry various information called up through contact with the smartphone. Specific action can also be programmed on the smartphone, which is carried out upon contact.

In trade, you can usually find NFC-enabled POS terminals in large retail chains. Sixty percent of  POS terminals are already NFC-ready. However, the proportion is expected to increase quickly.

This year, Google also launched its mobile payment service Google Pay at the end of June. Android users can pay in online shops, make payments in apps, or shop in the supermarket via NFC. So it is enough to have your cell phone with you when you go shopping. Financial service providers such as VISA, Mastercard, or Commerzbank are already partners of Google Pay. The bank card data and various customer and gift cards can be saved on the smartphone so that all payments can be made with one device. Google is putting pressure on banks and tech companies.

In the middle of the 2018 Christmas season, Apple will also launch its Apple Pay service. According to the company, the focus should be on data protection and security. When adding a credit or debit card, the actual card numbers are not stored on the device or Apple servers. Instead, a unique device account number is assigned, encrypted, and stored in the security element on the device. Each transaction is authorized with a unique, unique dynamic security code, according to the VDI Nachrichten. The authentication for entering delivery information in payment forms takes place via the face recognition system Face ID. Apple Pay works with the iPhone 6, iPhone SE, and iPads.

Sparkasse customers have been able to pay at the till with their smartphones since July 2018. Most of the regional branches already offer the smartphone payment system, and by the end of the year, all 390 savings banks should have mobile payment on offer. However, only customers with an Android device can use the service because mobile payment works via the “Mobile payment” app from the

Play Store. The amount is then deducted from the account afterward, as with the card payment. The Savings Banks and Giro Association assures that no customer data will be passed on or sold to third parties.

Other financial institutions, such as the Volksbanken and Raiffeisenbanken, also want to get involved in mobile payment and enable their customers to pay by smartphone. Other banks want to follow this trend by 2019 at the latest.

However, all providers have in common so far is the low maximum amount for mobile payments at the checkout. In most cases, the maximum amount is set at 20, 25, or 50 euros.

Where Is NFC Used, And What Does The Future Promise?

The private use – especially in ​​contactless payment – of NFC is increasing, and the technology offers significantly more potential for different areas of application. It could simplify even more everyday situations in the future.

Smart Cities, Factories, And Homes: Since passive NFC carriers with chips and antennas do not need their power supply and are very inexpensive at less than one euro each, they can be used in various situations: NFC wristbands, stickers, or -Cards can be used every day to exchange information constantly.

A framed photo could serve as a speed dial – an NFC chip on the back makes it possible. This opens up new possibilities for advertising media: First, the design and slogan arouse the interest of passers-by, then they can be forwarded to the website via the NFC interface on the phone. Simple activities such as opening house doors could also be replaced by NFC, leaving space in hand and hand Save trouser pockets because the key would be completely gone.

Even in industry, complex logistics systems can be significantly simplified with NFC tags. The technology has been used for a long time for recording working hours and access control in buildings.

As A Coupler For Other Networks: NFC should not be seen as a competitor to Bluetooth or WLAN but complement such cellular services. Cumbersome connection processes, such as entering a long WLAN key or Bluetooth pairing, can be avoided by holding the smartphone or other device to the NFC interface again. The rest then happens fully automatically.

Connection With Other Smartphones And Devices: The connection of other devices with the smartphone is conceivable and possible. So already exchanged data via NFC between Android devices. The function is known under Android Beam. It is also possible to connect to a smart TV to transfer the mobile phone display to the television.

Password Management: With NFPass, a password manager, passwords can be stored encrypted on NFC chips. This should provide security: Since the confidential data is neither on the device nor on a server, physical access is necessary. They are only called up if they are activated via smartphone and NFC.

Everyday Products: NFC is also used in everyday life. There are probably no limits to creativity here, as even stadium visitors can now use the technology to pay for their beer. This is made possible by a project from Austria. Under the name “Flip,” the inventors sell a smart mug with an integrated NFC chip on its holder. This is hidden behind individually designed cup holders. The URL stored on the chip can be changed. For example, it can be linked to a website, a form, or a social media page. The cup is currently being used in the Innsbruck stadium. Users can use the chip to top up their stadium card and thus pay for food and drink via NFC. Linking it to competition would also be conceivable.

NFC can also be a practical aid in the supermarket to provide the consumer with further product information. Especially allergy sufferers who want to know exactly what the ingredients are. Often there is not enough space on the packaging to display all the information. But with an NFC code, the buyer can quickly call up additional data via smartphone.

When it comes to new technologies, many rightly ask themselves how safe they are in everyday life. Financial institutions consider the mobile payment method to be secure. A not inconsiderable reason for this is that a fraudster would have to come within centimeters of the card or smartphone owner to intercept data with a reader. Then the information can be spied on. When it comes to IT, experts generally agree that there is no such thing as one hundred percent security and that security gaps naturally also exist here.

In addition, there is uncertainty in the event of device loss. The more data it contains from credit cards, access codes, etc., the greater the effects of misuse. Probably only smaller payments without a PIN or unlocking the smartphone are accepted because service providers are aware of the dangers. In this way, the damage remains manageable if the device is lost.

As with most technologies, NFC takes time to become established. The technology was no longer a novelty in 2018, yet there is still a lot of uncertainty about contactless payment. In addition, the infrastructure takes several years to implement new technologies. It was similar to the mobile phone back then: it was used commercially as early as the 1980s. Telephone booths that were rendered obsolete only disappeared decades later. Reasons such as call and device prices as well as an unstable network deterred many potential customers.

The still-popular cash payment and security concerns hold NFC back. Especially in ​​security, the technology must be further developed through several authentication factors to guarantee secure payments.