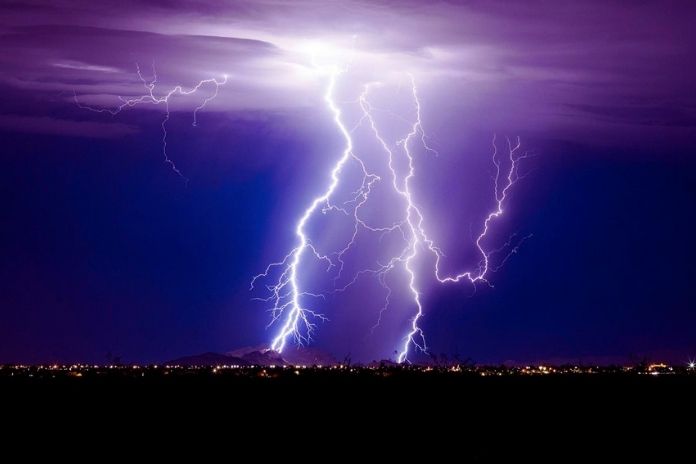 Predict Lightning: Not only can lightning strikes cause significant damage, but they are also a great danger to people and animals. 10 to 30 minutes in advance and within a radius of 30 kilometers – this is how accurate the predictions of lightning strikes should be according to the new system of a research group at the EPFL School of Engineering in Lausanne. To do this, they use a combination of standard meteorological data and artificial intelligence (AI). “Current systems are slow, very complex, and require expensive external data that is recorded by radar or satellite,”. The doctoral student developed the technology for the system. “Our method uses data that can be obtained from any weather station. This means that we can also cover remote regions beyond the range of radar and satellites and in which no communication networks are available. “

The combination of standard data from weather stations and artificial intelligence makes the new system as simple as cost-effective. All data is recorded in real-time. This enables predictions to be made very quickly. As a result, warnings can also be disseminated early, even before the storm has formed.

In addition to the weather data, the researchers used a machine-learning algorithm. They trained him to recognize conditions that lead to lightning. For the training, the researchers used data from 12 Swiss weather stations over ten years. These are located in both urban and mountainous areas. The team mainly focused on four parameters: air pressure, air temperature, relative humidity, and wind speed. They put these concerning records from lightning detection and location systems. The result: the system made the correct predictions in almost 80% of all cases. The researchers think that it can now be used anywhere.

Simple Prediction For The Complex Phenomenon

However, the system is susceptible to changes that may occur in the environment. You can impair the learning process of the software during the training or change the influencing factors of the climate afterward in such a way that the hit rate of the predictions decreases. This could be the case, for example, if additional high-rise buildings were built near the weather stations.

Nevertheless, according to the researchers, it is the first time that lightning strikes have been predicted based on simple meteorological data in conjunction with artificial intelligence. What is unique about the system developed by the researchers from Lausanne is that they have found a simple way of predicting a complex phenomenon.

Lightning occurs in connection with thunderstorms. In Central Europe, these occur mainly in summer, when a lot of water evaporates from the sun, and the air warms up. If the warm air meets a cold front, the cold air is pushed under the warm air. This warm, humid air rises, the water vapor condenses, and rain clouds form. Not all raindrops fall from the shadows. Some stay and become ice grains. The uneven distribution of ice and water and updrafts in the cloud creates spaces with different charges. If the tension becomes too great, it discharges in the form of lightning. This serves to equalize pressure and can occur within the cloud or between the ground and the lower part of the cloud.

A lightning strike is comparable to a massive short circuit. In extreme cases, the thundercloud and the ground voltage difference can be more than 100 million volts. Most lightning strikes start on the ground and spread upwards. Not all lightning is dangerous. But in exceptional cases, they can split trees, damage electronic devices, set houses on fire, destroy entire power lines, and bring the network to a standstill. If humans or animals are hit, there is a danger to life. This is why an early warning system like the one developed by the Lausanne researchers helps minimize the effects of lightning strikes on critical infrastructures, sensitive devices, systems – and, of course, ways of life.