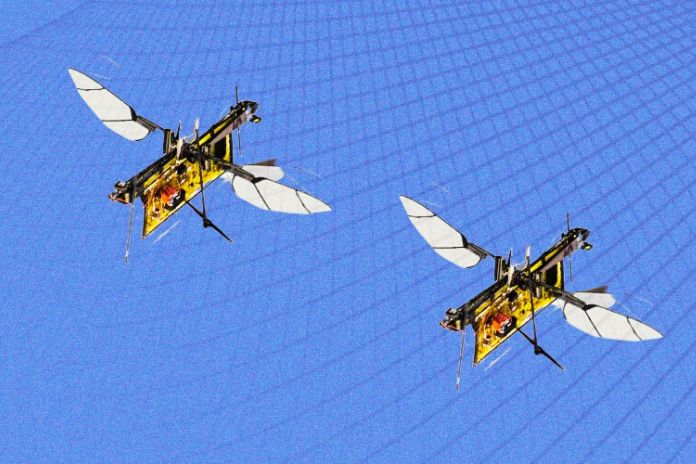 Researchers from the Massachusetts Institute of Technology (MIT) have developed robotic fireflies that can communicate with each other, via pulses of light. They should be used in areas that are difficult to access and thus save lives.

Science is always looking for solutions from nature. No wonder, since evolution still knows best what works and what has no long-term chance of survival. For example, fireflies are pretty fascinating animals. The insects communicate continuously with their environment through light pulses.

Researchers from the Massachusetts Institute of Technology (MIT) saw this, too, and developed a rather interesting tool. Because small flying robots, which are hardly more extensive than an insect, may soon fly through collapsed buildings and save lives with pulses of light. At least, that is the vision of the researchers.

Artificial muscles form the basis for the little robot fireflies. Tensing or relaxing these creates an updraft so that they fly. The robots hardly weigh more than a paper clip. But that also has disadvantages. For example, due to their weight, they cannot carry sensors.

As a result, until now, it has been challenging to determine the position of the robots. Large infrared cameras, which were difficult to transport, were necessary. But nature has a solution for this as well. The robot fireflies emit light signals so researchers can determine their position using an iPhone camera.

The robots have a self-luminous coating for this purpose. The light pulse is, in turn, emitted by the build-up of an electric field. The energy required for flying is entirely sufficient. Using different colors – green, orange, and blue – the scientists then determined the position and orientation of the flying objects via an iPhone camera.

So far, the robots have been continuously lit. However, an effect similar to real fireflies will be achieved in the future. Then emergency services could deploy the tiny machines in crisis areas and find survivors in collapsed buildings.

ALSO READ: Researchers Are Developing A New Method Against Microplastics